Road legal and ready for 90 days of fun in the sun. 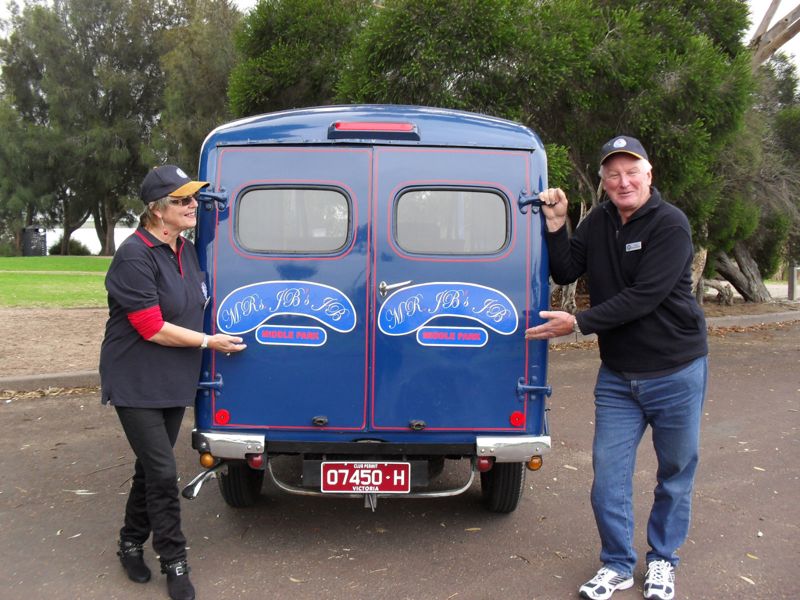 The History of this van and the plan of work that needs to be done.

All about the owner.

I have 2 Australian built Mokes and have seen the J series Van around in car museums / at show for some time. Our Mokes have been restored and are in original condition, but all the J Vans I had seen were “Restorers” –too much for me .

The J Van is rather cute, and everybody who has seen ours thinks the same. My initials are JB so I bought 3 “Corgi” J models off EBay

While I was browsing the internet I came across “Roland’s” blog site and a Blue J restored van in UK was on eBay UK . I tried to contact the seller, but got no response and the Van subsequently disappeared off E Bay. Another, a Red J ute turned up on eBay UK, and that too disappeared before the end of the eBay auction. A virtual shell turned up 200 km from here, but that would have been too much work for me.

Next “Roland’s” site turned up a Austin 101 in Sydney. I rang the seller and he really didn’t know much about the vehicle. He had bought it, in 2007 as a reasonably restored body, with mechanicals “to be restored”. He was not mechanical so he sent it to a very reputable “Morris Minor” repairer in Sydney. After some six months or so of being in that repairers garage the Van appeared and was registered in Sydney for full road use.

I told the seller I would have to come and see it (Sydney is 1000 km away) and I was subsequently diagnosed with cancer. An operation fixed the cancer and a month or so after, I went to Sydney. The body had been done up, a bit on the cheap, but not bad. The mechanicals were terrific (with receipts to verify the good work)

I told the vendor we would think about it and next day, with a pile of cash I my pocket, I phone and suggested I call and speak. The vendor was too busy that day, so I offered a lot less than he was asking. I think he nearly fell over, but agreed to think about it for the weekend. He rang an hour later and told me he had sold the van to the mechanic who repaired it for the price he was advertising, and if I wanted to bid higher I could have it. I declined.

Two weeks later, he rang my partner, we had used her phone when we spoke to him before, and advised the sale had fallen through and "was I still interested". I had expected the call as the Van was still being advertised for sale, and I really didn’t think the mechanic would want to buy it after charging for his work over the past three years.

I delayed calling for a week or so, and over the following weeks got the vendor to accept a low price. The Van was picked up by a trucking Company in Sydney and delivered to Melbourne.

The van is defiantly a Austin 101

The Van was delivered new to a Company called “Federal Springs” in Brooklyn (An inner Melbourne suburb) who made springs for cars, trucks etc

I have also found a plate on the Van saying

Kensington (This is another inner Melbourne suburb)

The Van was then discovered near Geelong (50 km south of Melbourne) by a “Car restorer” in 2000. It had been a "Paddock car".He had the body repaired, and in 2007 sold it to my Vendor who took it to Sydney on a trailer.

A Sydney “J” enthusiast (Peter) was aware of the Van in Sydney and he advises it is defiantly a “JB”.

I am in an inner Melbourne suburb, so apart from 3 years in Sydney, the van has been all its life within 50 km our home., in its early years within 5 km of here

That is the story so far, and is yet to be confirmed. It can’t be both an Austin 101 and a Morris J so I have requested a search of the factory records in UK based on the chassis Number – the original engine was replaced in Sydney with a 1622 cc BMC “B” series engine so I can’t search on the Engine Number

I understand the Morris Commercial records are just about non existent, so if it can’t be traced it must be a Morris – probably 1959 JB

It was registered for the road in Sydney as a 1952 Austin 101 – all the paperwork form the original owners is lost, and the Austin 101 was not produced till the introduction of the JB in 1957. In brief we have a few contradictions to date.

I really must acknowledge the help I have had from Roland, or I would not have found it, or been able to find out what I have found so far.
In the UK the chassis number would have been stamped on a small tin strip and mounted by the radiator filler cap. It would have been stamped with a prefix of either JB/MR 45066 or JB/AR 45066 (M for Morris, A for Austin) the chassis dates the van as being late 1959 production. The Australian plate misses out this vital prefix. Maybe this is not important, maybe the fact that another 50 years old vehicle is out there being enjoyed and used for what it was designed for.
Plan of work.
Well I would like to investigate the steering set up as to me there is rather a lot of play in it, rather like steering a boat. I just intend at the moment to enjoy my new toy, take it to a few rallies and with luck meet up with another J owner and compare vehicles.
Watch this blog for more postings about its history, restoration/improvements under taken and rallies/shows attended.